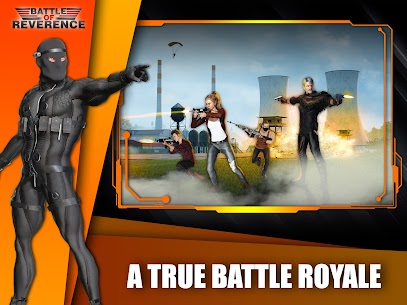 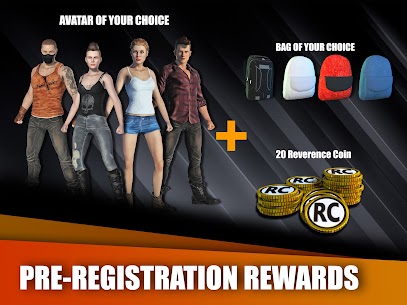 BATTLE OF REVERENCE is a new battle royal game where multiple players can use strategies to fight and be the last man standing on the battlegrounds. Explore the environments of the shooting battlegrounds with parachute landing from the high-speed air-craft. Build up your own rules for the online multiplayer shooter.

The Krur Kshetra map is enormously large battle ground, stretching upto 8X8 KM with stunning view from every corner of map. Dive into the beautiful island of Krur Khetra where the river divides the grass land, desert land and ice land in single map. Krur Kshetra map has open field for players who like to play wildly and also has cities for players who like to play strategically. Whether it is long range Sniping game or close range urban combat, this glorious ground is designed with keeping in mind every possible game play scenario.

[About BATTLE OF REVERENCE game]
The realest Battle Ground on your phone! The battlefield is constantly changing and shrinking, it’s a race against the clock!

1. *** [GAMEMODE] ***
– Get to the #1 by being the one last standing man in game session and earn your place in global leader board
– With only one chance to re-spawn in free-fire zone, survive against the shrinking Danger zone
– Thousands of items on the maps to loot and get equipped to hunt down enemies
– Crush enemies with different vehicles on the roads and water of map in BATTLE OF REVERENCE

2. *** [WEAPONS] ***
– Sniper rifles, designated marksmanship rifles, machine guns, shot-guns, pistols, sub-machine guns, melee weapons; just find anything and survive the battle field
– Use Red-dot, 2X, 3X, 4X, 6X or 8X to increase your chance for survival
– Blow-up the competitors with grenade or batli-bomb, stunned them with flash-bomb or get cover with smoke-bomb
– Get loaded with primary gun, secondary gun, pistol and melee to attack your rivals at your best in intense combat

3. *** [Fast-paced GAMEPLAY] ***
– Smooth frame rate, ultra high resolution realistic graphics, amazing effects with fantastic map
– 100 player will dropped onto deserted island to survive
– A danger zone will shrink over 30 minutes and player has to hustle for weapon and supplies to take down other surviving enemy
– Shoot, Snipe, Hide, Fight and make Strategy to survive

The Battel doesn’t stop here. You can select your own avatar and bag, and create your bold identity in game. You can accept challenge before game session to increase your RC (Reverence Coin). RC can help you to buy more avatars, bags and re-spawn to take revenge.

As we progress down the calendar, we will hear more feedback from you, and we will work to bring exciting new updates.

So, what are you waiting for? Pre-Register now and get exclusive rewards.

How to install Battle of Reverence ?